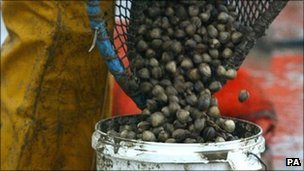 The cockles were seized at beds in Thurstaston on the Dee Estuary, the agency said.

Three people have been reported for summons after two and a half tonnes of cockles were seized by Environment Agency officers in Wirral.  Cocklers were stopped as they left the beds at Thurstaston on Thursday and the amount of their harvest checked.  Each of the 50 licensed cocklers on the Dee Estuary are allowed a maximum daily catch of 300 kilograms (661lb).  Licensees caught exceeding the allowance face enforcement action and risk losing their licence.

In July more than eight tonnes of cockles were seized during a similar operation and in mid-August three men were found cockling illegally on the estuary in the early hours of the morning.  David Edwell from the Environment Agency Wales said: “We are determined that cockling in the Dee Estuary remains sustainable and is not threatened by some licensees who disregard the rules.

“Taking more cockles than allowed upsets the balance of the cockle beds and reduces the amount available for next year’s take – as well as the wildlife who make their home in the estuary.

“It may provide some people with a short-term gain, but it damages the future of the other licensees in the area.”

The beds on the Dee Estuary are open for six months of the year.